Crime is up in New York, and we’re told that nowhere has this been felt more than in the City’s subway system. If fact, subway crime is up close to 20% in the past month, compared to the same period last year. Statistics on the subject include subway robberies which are up by 65% over the past month, although they are up by only 10% this year. Assaults 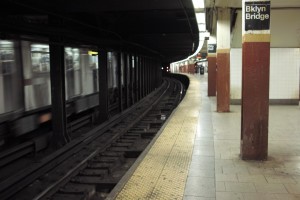 are also on the rise. Other recent statistics include turnstile-jumping, which is up during the past month, but down 14% for the year. The recent numbers led to meeting called by the top brass from the NYPD, to grill commanding officers, lieutenants and detective sergeants from the Transit Police on the subject of the increases. Topics included repeat subway offenders, and the specifics of how the transit cops are deployed throughout the subway system. The detectives were also instructed to increase surveillance in underground stations.

We’ve discussed in our blog on previous occasions the dangers of relying on statistics, particularly over a very short period of time. Our experience is that while short-term figures tend to fluctuate – sometimes wildly – and make good headlines, those fluctuations often disappear when you view numbers over a somewhat longer period of time. In this case, our reluctance to have a knee-jerk reaction to the short-term subway numbers seems appropriate. Indeed, overall arrests in the transit system are down by 15% this year, despite adding overtime to increase the police presence on the subways, buses and elsewhere in the system.

So we’re not sure if the increase in robberies represents a trend, or something much less sinister. Whatever it means, you can expect to see more cops on the subways in the coming days. Overtime will continue to fund the extra officers, and peer training and social media activity serve as additional efforts to lower the overall crime rate on the subways.